The Book that Made Philosophy Modern: the World of Descartes’s Treatise on Man 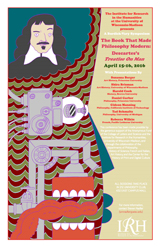 In 1633, the French philosopher René Descartes, living in self-exile in the countryside of the province of Holland, was putting the final touches on what was supposed to be his first published treatise. For some years he had been working on a variety of scientific topics. These included grand cosmological questions about the origin of the universe and the forces governing its phenomena, and more particular topics, such as the trajectory of comets, the operation of the magnet, the dynamic behavior of fluids, and the causes of the tides. Descartes was especially interested in resolving a number of geometrical problems in optics and the science of light. He investigated the colors of the rainbow and the material and mental processes involved in visual sensation. Writing in 1629 to his friend, the Minim friar Marin Mersenne, who operated a far-flung intellectual network from his rooms in Paris, Descartes boldly said that his treatise will contain nothing less than “all the phenomena of nature.” Its title, appropriately, was Le Monde, or The World.

Descartes was certainly concerned about how the planned work—which was to include an essay on the human being, titled L’Homme (Treatise on Man)—would be received by religious authorities. In his speculations on the origins of the cosmos, he was afraid of being drawn into debates about whether the universe is created or eternal, finite or infinite, theologically dangerous terrain that had doomed many an earlier thinker. Descartes also knew that what was likely to strike contemporary theologians as the most problematic feature of The World, should he publish it, was his rejection of the Ptolemaic or geocentric model of the universe in favor of the Copernican heliocentric model.

Still, by autumn, Descartes decided that The World was ready for publication. And then, just when everything seemed set, Descartes learned about the condemnation of Galileo in Rome for defending the Copernican system. Descartes was now scared. He claimed that the heliocentric model “is so closely interwoven in every part of my treatise that I could not remove it without rendering the whole work defective.” He decided “not to publish the treatise I have written and to forfeit almost all my work of the last four years in order to give my obedience to the Church, since it has proscribed the view that the earth moves.” This was, in fact, not so much an act of faithful obedience by a devoted Catholic but a defensive tactic within his general strategy to preserve his “repose and peace of mind.

The first part of The World, the physics and cosmology, would eventually be published in 1664, fourteen years after Descartes’s death. As for the second part, the Treatise on Man, it too would appear only posthumously, in 1662 (in a Latin edition) and 1664 (a French edition). It was this latter work, a thoroughly mechanistic account of the human body, devoid of any Aristotelian “forms” or “qualities” and functioning, like any natural body, solely through the motion and rest of minute parts of matter, that would turn out to be truly revolutionary. It was perhaps Descartes’s most influential book in the seventeenth century.

The Treatise on Man ushered in a new era of philosophy. The latter half of the seventeenth-century was dominated by Cartesian thought, but a Cartesianism that had been supplemented, modified, and “corrected” by Descartes’s latter-day followers. The Treatise on Man was also highly controversial, especially insofar as Descartes seemed to some readers to be saying that the human soul played no role in the operations of the human body. If the human body really does function as a purely mechanistic device, then what need is there of the immortal soul so dear to the Christian religion? His theological critics regarded it as a book that could only foster materialism and atheism.

2:00-3:30: Shira Brisman (Art History, University of Wisconsin-Madison): “Between the Lines”