The Long, Glorious, and Unfortunate Life of Pompey the Great 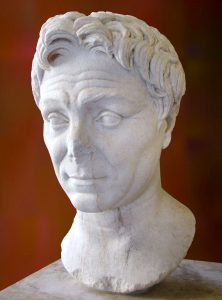 Young Pompey was “great” in the way that mattered most to the Romans: on the battlefield. He earned his title at a relatively young age and became greater as he grew older, achieving military victories against a variety of opponents over a wide geographic area, and basking in the glory of three triumphal parades. In typical Roman fashion, he converted his military success into political capital, becoming a major benefactor of Rome and holder of its highest elected office. His life, however, ended in defeat and an ignominious death. As a result, ancient authors (including historians, biographers, and poets) usually told his story in tragic or ethical terms. They fit his life to a “rise and fall” trajectory, faulted him for relying too much on Fortune, or offered his demise to readers as a cautionary tale. Modern historians, however, typically synthesize these ancient accounts, using them as sources for historical information while muting the authors’ voices. In my biography of Pompey, I foreground the ancient accounts to show how the form of Pompey’s story became as important as the content. In this talk, I will demonstrate my method by examining two important moments in Pompey’s life: his third triumphal parade, which was typically seen as the apex of his rise-and-fall career, and his decision to seek refuge in Egypt, which fatefully led directly to his murder.

Jeff Beneker’s primary research interest is in Greco-Roman biography and historiography. He has written a book on Plutarch’s biographical method, The Passionate Statesman: Eros and Politics in Plutarch’s Lives (Oxford University Press, 2012), and articles on Plutarch, Cornelius Nepos, Suetonius, and Homer. With Craig Gibson (University of Iowa) he has published an edition and translation of the progymnasmata of Nikephoros Basilakes for the Dumbarton Oaks Medieval Library (Harvard University Press, 2016) and is cooperating with Gibson on a translation of The Book of Syntipas the Philosopher, also for Dumbarton Oaks. He is currently writing a biography of Pompey the Great (for Princeton University Press), translating Plutarch’s political essays (also for PUP), and with Georgia Tsouvala (Illinois State University) he is co-editing a book on the discourse of marriage in the Greek and Latin literature of the Roman Empire (for University of Wisconsin Press). In addition to teaching courses in Greek and Latin language and literature, he teaches lecture courses on Classical Mythology, Greco-Roman religion, and Ancient Epic.