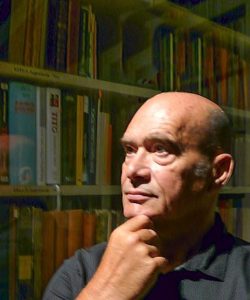 The influx of hundreds of thousands of refugees from the Middle East into Europe has challenged the existing notion of national boundaries and demonstrated an increased need for a public policy that would take into account problems arising from the forced movement of population on such a large scale. Media reporting of the crisis focuses on the plight of miserable migrants who are using Macedonia, Serbia, Croatia, Slovenia, and Hungary as transition points to reach the wealthier countries in Europe. Needless to say, countries comprising the European Union have had vastly differing responses to the issue of national boundaries and their permeability in the ongoing migration crisis.

Tomislav Z. Longinović (Ph.D., MFA) is Professor of German, Nordic, and Slavic at the University of Wisconsin-Madison. He is currently Visiting Professor at Harvard University. His books include Borderline Culture: The Politics of Identity in Four Twentieth-Century Slavic Novels (1993), Vampires Like Us (2005), Red Knight: Serbian Women Songs (1992, co-edited and co-translated with Daniel Weissbort), and the edited volume: David Albahari, Words are Something Else (1996). He is also the author of several books of fiction, both in Serbian (Sama Amerika, 1995) and English (Moment of Silence, 1990). His new book Vampire Nation: Violence as Cultural Imaginary was published by Duke University Press in 2011 and was awarded the 2012 Mihajlo Miša Đorđević prize for best book in Serbian studies. His research interests include South Slavic literatures and cultures; literary theory; Central and East European literary history; comparative Slavic studies; translation studies; cultural studies. He is currently working on the book manuscript entitled The Secret of Translation, which features a theory of culture based on relational structures rather than ethnic or national ones.

Event sponsored by the The Center for the Humanities, UW–Madison.