The Other Operation Dixie: Public Employees and the Postwar Revival of Organized Labor 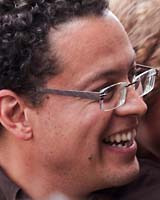 The defeat of Operation Dixie, a million-dollar campaign to unionize southern manufacturing after the Second World War, has long been recognized as a critical watershed in the postwar decline of organized labor in the United States. Yet not a single book or article even mentions the equally ambitious effort unionize public employees, which was launched a few days earlier and just down the Atlantic City boardwalk from the southern campaign and which laid the basis for a dramatic surge of unionization in the rapidly expanding service sector. My talk examines the reasons for this success and asks how it forces us to rethink common assumptions about class, race and the relevance of unions in the postwar era.

Will Jones is an Associate Professor of History at UW Madison. He is a specialist on the United States Since 1945, and his research focuses on the intersecting histories of race and labor. He is the author of The Tribe of Black Ulysses: African American Lumber Workers in the Jim Crow South, and his articles have appeared in journals including Labor, The Journal of Urban History and The Nation. In addition to The New Color of Class, he is writing a book on the 1963 March on Washington for Jobs and Freedom.