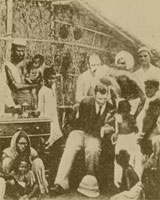 The Victorian period saw the growth and consolidation of the science of tropical medicine. Driven by the imperative of maintaining and restoring the health of European settlers, the language of tropical medicine offered a vision of the tropics as a zone of proliferating and contaminating diseases, as well as the possibilities of containing and defeating these. Thus, against the tropics as a zone of contagion grew the idea of palliative empire – empire as a force of medicine, science and restorative care. Particularly important here was the role played by a group of English doctors whose texts formed the core of the first tropical medical canon. Unsurprisingly, such ideologically charged language of contagion, infection, medical care, and palliative empire crossed disciplinary boundaries and became a part of popular Victorian ‘commonsense”. Writers concerned with representing the reality of Britain’s global empire found this language of diseased tropicality to be rich and suggestive. This paper will look at how one such writer, Rudyard Kipling, used the ideas of disease and medicine in his shorter fiction to explore the possibilities and limits of empire.

Upamanyu Pablo Mukherjee is an Associate Professor (Reader) at the Department of English and Comparative Literary Studies at Warwick University, the U.K.  He was born in Kolkata, India and educated there, and went on to do further degrees in Oxford and Cambridge.  He has taught at Newcastle and Warwick Universities in the U.K. and is the author of the books Crime and Empire (2003) and Postcolonial Environments (2010). Dr. Mukherjee is currently working on a number of research projects, including a monograph provisionally titled ‘Fevers and Famines: Natural Disasters and Victorian Empire’ and with a Warwick Research Collective on ‘Aesthetics of Peripheral Modernity’.  Dr. Mukherjee’s other interests and specialisms include contemporary film and media, sports, travel, and popular music.