What’s Your “Archive”? Formation, Collection, and Evidence across the Humanities 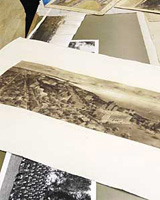 Historians often describe the evidentiary basis of their work as fundamentally archival, whether drawing on collections of documents or oral histories. But what does “the archive” mean in other humanities disciplines? What are your sources and methods for finding or using them? Are your archives material, performative, ephemeral, virtual? Where are they located? How are they selected, collected, accessed, and used? What are the language issues involved in your archive? In what way are your archives an exercise in memory? In desire? What are the politics of archives and the knowledge they produce? In what sense do the archives you use provide agency for, misrepresent, or suppress what you are researching? Do you “discover” meaning in your archival data, “dialogue” with it, “interpret” it, read against its grain, or recreate it? How is the digital revolution changing the nature of archives, specifically of YOUR archives? Do you use Google as your “archive”? Amazon.com? Facebook, blogs, or other forms of digital/social media? Do archives foster or discourage generalizing, comparative, and/or theoretical thought?

Linda Gordon is University Professor of the Humanities at NYU and Vilas Distinguished Research Professor emeritus at the Univ. of Wisconsin. Her most recent books are Dorothea Lange and The Great Arizona Orphan Abduction. She won the Bancroft prize for best book in US history for both books, as well as the Los Angeles Times Book Award and the National Arts prize for writing about the arts. She will soon deliver the Trevelyan Lectures at the University of Cambridge, and has under contract (with W. W. Norton) a book on the “long women’s movement,” 1930 to the present. She divides her time between Madison and NYC. Having spent years in archives, she is enormously grateful for the Wisconsin State Historical Society, champion among archives.

Theresa M. Kelley is Marjorie and Lorin Tiefenthaler Professor and Chair of English at University of Wisconsin, Madison. She is the author of Wordsworth’s Revisionary Aesthetics (Cambridge University Press, 1988), Reinventing Allegory (Cambridge University Press, 1997), and Clandestine Marriage: Botany and Romantic Culture (Johns Hopkins University Press, August-September 2012), and essays on romantic poetics, aesthetics, visual culture, and philosophy. Her current research is divided between two projects: a series of essays on botanical art and color theory around 1800 and a book, provisionally titled Romantic Futures, that examines romantic efforts to narrate futurity after the Reign of Terror.

Vinay Dharwadker is Professor in the Department of Languages and Cultures of Asia, UW-Madison. In 2008 his Kabir: The Weaver’s Songs (Penguin Classics, 2003, 2005) won India’s multi-year national translation prize, and his contributions to The Greenwood Encyclopedia of World Popular Culture (2007) received the American Culture Association’s Ray and Pat Browne Award for best reference work. He is the South Asia editor of the new Norton Anthology of World Literature, 3rd ed., 6 vols. (2012). His recent essays are on “Diaspora and Cosmopolitanism” (Ashgate, 2011), “Constructions of World Literature in Colonial and Postcolonial India” (Routledge, 2012), and “Censoring the Ramayana” (PMLA, May 2012).

Michele Hilmes is Professor of Media and Cultural Studies and Chair of the Department of Communication Arts at the University of Wisconsin-Madison. Her work focuses on media history and historiography, particularly in the area of radio and creative soundwork. She is the author or editor of several books in this field, including Radio Voices: American Broadcasting 1922-1952 and Network Nations: A Transnational History of British and American Broadcasting. Her current project is Radio’s New Wave: Global Sound in the Digital Era, co-edited with Jason Loviglio.

Patricia A. Rosenmeyer (Ph.D. Classics and Comparative Literature, Princeton 1987) is Professor of Classics at the University of Wisconsin-Madison. She came to Madison in 1997 after teaching previously at Michigan and Yale. Her areas of specialization are Greek poetry (Archaic and Hellenistic), epistolary narratives, and literary reception. She is affiliated with Comparative Literature, the Center for Jewish Studies, and ILS, as well as Editor for the Series in Classicsfor the University of Wisconsin Press. She is a past recipient of ACLS and NEH awards. Her publications include The Poetics of Imitation: Anacreon and the anacreontic tradition (Cambridge 1992); Ancient Epistolary Fictions: the Letter in Greek Literature (Cambridge 2001); and Ancient Greek Literary Letters: Selections in Translation (Routledge 2006), She is currently working on two books: Singing Stones: the Inscriptions of the Memnon Colossus, the statue that inspired Shelley’s “Ozymandias”; and Reflections of Sappho, a monograph on the reception of Sappho from antiquity to the present. In addition, she is co-editing Ancient Epistolary Narratives, a volume on varieties of epistolary forms in Greek antiquity; and developing articles on the reception of Greek poetry by French (de Louÿs) and Hebrew (Tchernikovsky) authors in the late 19th and early 20th centuries.