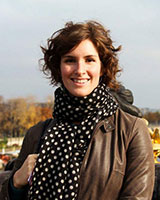 Derived from my dissertation project on popular music and resistance in German-Occupied France, this presentation investigates how upper-middle class Parisian youth, known as “zazous,” mobilized jazz music to fashion a subversive identity that expressed their refusal to serve as national scapegoats and their rejection of fascist political ideology. Drawing upon police records and newspaper reports I recovered in Parisian archives, I argue that the zazous’ performance of swing identity undermined the essentialist racial ideology espoused by Vichy and exposed Nazi Germany’s “pure” New Europe as a social construct rather than a scientific truth. In the face of existing anxieties over the effects of nègre music on French audiences, zazou songs and fashion helped Parisian youth mark a racialized swing identity on their white, upper-middle class, Gentile bodies that transgressed appropriate norms of gender and class and symbolized opposition to collaborationist politics. These “degenerate” musical practices presented powerful evidence, visible on the streets of Paris, that what Vichy and Nazi officials presented as the inescapable natural order was really a set of social constructions that were invented and could be contested. The subversive message conveyed by the youths’ performance of zazou identity was not lost on Vichy sympathizers and Nazi authorities, who disciplined the zazous by denigrating them in the press and subjecting them to violent street attacks.

Kelly Jakes is a Dana-Allen Dissertation Fellow and a Ph.D. Candidate in the Department of Communication Arts at the University of Wisconsin-Madison. Most broadly, her research focuses on the themes of popular culture, identity, and resistance. Employing theories and methods from the fields of rhetoric, performance studies, history, and musicology, she strives for a deeply interdisciplinary approach to the study of textual, musical, and embodied discourses. Her work has been supported by the Chateaubriand Fellowship for research in the humanities, a competitive, national grant awarded by the French government.