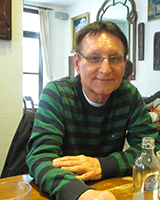 This presentation focuses on the diary Argentine playwright and theater professor Tulio Carella (1912-1979) wrote during an 18-month stay in Recife, Brazil, in the politically charged period leading up to the 1964 coup. The apprehension of the manuscript (published a few years later as Orgia) by the military deployed additional fissures to Carella’s writing of exclusion and pain, and provided further evidence that private practices were receiving political significance at a time of growing repression in South America. In this paper I undertake a critical reading of the extensive changes Carella made to his text upon his return to Argentina, including the framing of his Recife experience in terms of politics, a gendered performance, and his particular take on Pan-Americanism. The larger project calls for a rethinking of the entire approach to Carella’s writings. A reconsideration of his contributions should begin with the exact reason(s) behind the virtual ignorance Orgia has been relegated to in Argentina, Brazil, and elsewhere. Carella’s Recife writings and his entire Brazil experience touch on too many issues that are central to contemporary theory to have been so blatantly ignored by scholars of gender, race, liminality, and theater and performance.

Severino J. Albuquerque is a Professor of Portuguese at UW-Madison, where he teaches graduate and undergraduate courses in Portuguese language and Brazilian literature and culture. His main area of research is contemporary Brazilian theatre and gender. He is the author of Violent Acts: A Study of Contemporary Latin American Theatre (1991); Tentative Transgressions: Homosexuality, AIDS and the Theater in Brazil (2004); editor of Joaquim Nabuco e Wisconsin: Conferências nos Estados Unidos (2010); and co-editor of Performing Brazil: Essays on Identity, Culture, and the Performing Arts (2015). He has also published numerous articles in journals and critical anthologies. He is co-editor of the Luso-Brazilian Review (Brazilian literature and culture); Brazilian theater and drama editor for the Handbook of Latin American Studies of the Library of Congress; and an editorial board member of the Latin American Theatre Review. Albuquerque’s book, Tentative Transgressions, was the recipient of the 2005 Roberto Reis Award of the Brazilian Studies Association (for best book on Brazil published in English between 2003 and 2005) and the 2008 Elizabeth Steinberg Award for best book published by the University of Wisconsin Press between 2003 and 2008.