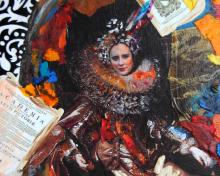 Writing the Museum: Pictorial Imagination in Baroque Fiction of the Spanish Empire

In 1660 David Teniers published the extraordinary Theatrum Pictorium, the first illustrated catalogue ever of a collection of paintings. It brings together text and image to represent 243 Italian paintings from the collection of Archduke Leopold-William, governor of the Low Countries under Spanish rule. The paintings are described in Latin, Spanish, French and German, and are minutely reproduced. With this book, not only was the museum made accessible, portable and reproducible, but there emerged a new and unique object located at the intersection of the spheres of art and writing and, significantly, between the space of the museum and that of the library. The Theatrum Pictorium can serve as a paradigm of what I explore in this book project which examines the unmistakable influence of art in literary fiction of the Hispanic Baroque by taking into consideration the enormous importance of the collections or proto-museums as spaces in which there emerged an interest in painting and visual language that revealed itself in other creative arts such as literature, and that surprisingly pervaded all social strata. Imitating the elite’s penchant for art collections (extremely accessible within the Habsburg realms), over time there arose a popular fervor for consuming and possessing reasonably priced, mass-produced paintings that became everyday objects. Hence we may be in a position to consider that the whole mass of men and women of the seventeenth century who invented their own ways of relating to art had a role and influence in the creation of the culture of their time. This energy generated by new practices of relating to art on the part of the popular classes is incalculable and hard to quantify. However, this does not mean that its existence had no effect or left no trace. Therefore I suggest that perhaps the literary/visual culture of the Baroque was not only transmitted from top to bottom but also from bottom to top because the aristocratic forms of artistic representation were transformed by colonizing the daily life of the seventeenth century.

Mercedes Alcalá-Galán is Associate Professor at the University of Wisconsin-Madison. Her research is oriented primarily towards topics in poetics and gender studies with special emphasis on visual studies. She has published a book on Cervantes’ poetics entitled Escritura desatada: poéticas de la representación en Cervantes (Centro de Estudios Cervantinos, 2009). She is also author of the book La silva curiosa de Julián de Medrano. Estudio y edición critica, and has published some sixty articles on early modern literature as well as contemporary Spanish literature. She is about to publish a book focused on the literary and pictorial representations of women’s sexuality in early modern art and literature: Discursos del cuerpo: mujer y sexualidad en la España de Cervantes and has just published in the journal eHumanista/Cervantes, as invited editor, a volume with 31 articles about Cervantes’ Persiles entitled “Si ya por atrevido no sale con las manos en la cabeza”: el legado poético del Persiles cuatrocientos años después. She has another book project well underway about visuality and ekphrasis in early modern Spain tentatively titled Representing the World: The Rise of Painting in Spanish Baroque Fiction. She was elected vice-president of the Cervantes Society of America and after a three-year term will assume the presidency.