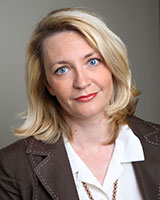 Mapping the Nations: The 19th Century Cartography between Imperial Politics and National Movements – A Case Study of Croatia

Huge geopolitical changes which took place during 19 century had crucial impact on Central and Eastern Europe cartography. Croatian example is maybe one the most specific. Divided between imperial interests of France, Britain, Italy, Ottoman and Habsburg Monarchy, mapping of Croatia went through a long journey, from imperial mapping in the first half of the 19 century to the development of national cartography in the second half of the 19 century. The purpose of the research is to present how cartography worked in the turbulent conditions of constant geopolitical changes and local national movements. The project would start with Croatia and progressively broaden to other part of the Balkans.

Mirela Altic, David Woodward Fellow in the History of Cartography is Senior Research Fellow at the Institute of Social Sciences, Zagreb (Croatia) and Associate Professor at Department of History, Faculty of Humanities and Social Sciences University of Zagreb. She teaches courses on history of cartography and historical geography. Her research explores 18th and 19th century maps as sources for the history of Central and Eastern Europe. She is also interested in missionary cartography, colonial cartography and history of exploration and discovery. Altic is the author of the book Historical Cartography: Cartographic Sources in Historical Sciences (Zagreb, 2004) which won the annual prize as the best scientific book of the year. Currently Head of the research project The Historical Towns Atlas – Historical Identity and Modern Development of Towns in the Republic of Croatia which is part of the international project of comparative studies of European towns. She is member of the Commission on the History of Cartography of the International Cartographic Association, Croatian representative in the International Working Group Historic Towns Atlases (under the coordination of The International Commission for the History of Towns) and member of the Society for the History of Discoveries.