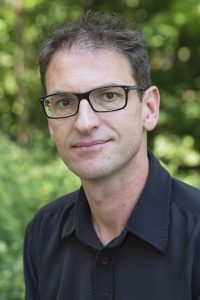 The Very Edge of Fiction: Karl Ove Knausgaard and the Post-Fictional Turn

Karl Ove Knausgård’s six-volume, autobiographical novel “My Struggle” is one of the most important literary achievements of the 21st century, widely hailed for its heroic exploration of selfhood, compulsive readability, and restless experimentation with form and genre. My book, for which I apply for funding to finish, explains why it is so important. As other critics have pointed out, contemporary literature is undergoing a “post- fictional turn” where the line between fiction and reality can seem impossible to establish. Knausgård, I argue, is defining that turn. By challenging the assumption that novels are fiction, he renews and revitalizes the genre.

Claus Elholm Andersen is the Paul and Renate Madsen Assistant Professor of Scandinavian Studies. In his research, he is interested in the novel and in questions of fiction and fictionality: what it is, how it works, and what it implies. His current work focuses on contemporary Scandinavian literature. He recently co-edited a special issue of Scandinavian Studies, with Dean Krouk, on Karl Ove Knausgård’s My Struggle and he is currently working on a book-length project on Knausgård called The Very Edge of Fiction. His latest publications are an article on Danish novelist Helle Helle in Edda in 2019 and an article on Henrik Pontoppidan’s novel Lucky-Per in Scandinavian Studies. He has given numerous talks around Wisconsin on hygge and happiness through the Badger Talks Program.