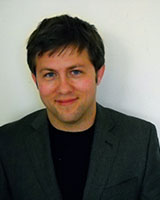 From the Roman Mediterranean to India: The Early Movement of Christianity through the Afro-Eurasian World System

My current project explores how Christianity made its remarkable voyage from the Roman Mediterranean to the Indian subcontinent, and it examines the social relations that made such movement possible. It also analyzes how the narrative tradition regarding the apostle Judas Thomas, which originated in Upper Mesopotamia and accredited him with evangelizing India, traveled among the social networks of an interconnected late antique world. In this way, the book probes how the Thomas narrative shaped Mediterranean Christian beliefs regarding co-religionists in central Asia and India, impacted local Christian cultures, and experienced transformation as it traveled from the Mediterranean to India, and back again.

Nathanael Andrade is an Assistant Professor of History at the University of Oregon. His past research has principally focused on topics relating to the Roman and late Roman Near East and its broader Mediterranean context. Since receiving his PhD at the University of Michigan in 2009, he has written Syrian Identity in the Greco-Roman World (Greek Culture in the Roman World; Cambridge University Press, 2013) and has conducted research as a regular member at the Institute for Advanced Study, Princeton, NJ (2012-2013). His research has also appeared in the Journal of Near Eastern Studies, The Journal of Early Christian Studies, and many other journals and edited collections. He is at work on a project entitled “From the Roman Mediterranean to India: The Early Movement of Christianity through the Afro-Eurasian World System.”