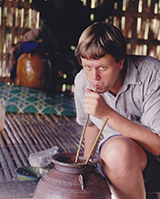 Indigeneity in Southeast Asia: The Geopolitics of the Expansion and Localization of an Increasingly Global Movement

This project is a study of Indigenous Peoples movements in Southeast Asia. While the concept of “Indigenous Peoples” (IPs) has largely become naturalized in the Americas, Australia and New Zealand, it remains highly contested in Asia. Up until the 1990s not a single country on the continent recognized the existence of groups of people legally defined as IPs. The concept, however, has gained traction, with both the Philippines and Cambodia now legally recognizing IPs. In other countries in Southeast Asia the concept is increasingly being evoked, even if most governments continue to reject the existence of IPs within their state boundaries. This project focuses on the geopolitics, at various scales, of the expansion and localization of IP movements in Southeast Asia. In particular, it examines how the concept of indigeneity is being interpreted, negotiated, contested, accepted, adapted and hybridized in various socio-cultural, political, and geographical contexts.

Ian G. Baird is an Assistant Professor of Geography at UW-Madison. He received his Ph.D. in Geography from the University of British Columbia. He lived and worked in Laos, Thailand and Cambodia for more than 20 years. He will spend the semester conducting research and writing about social movements in Southeast Asia associated with the concept of indigeneity. He will also organize an international workshop at UW-Madison regarding the concept of indigeneity in Southeast Asia. His primary research interests are land and resource management and tenure; the political ecology of large-scale hydropower dam construction in the Mekong River Basin; Indigenous Peoples movements in Southeast Asia; marginal histories in mainland Southeast Asia; and Hmong, Lao, Thai, Brao and Khmer Studies. He is at work at a project entitled “Indigeneity in Southeast Asia: The Geopolitics of the Expansion and Localization of an Increasingly Global Movement.”