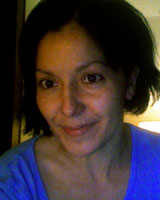 This book manuscript in progress illuminates contemporary trends in ethnic and racial representation in Hollywood film and U.S. entertainment television, particularly with respect to claims by some that we have entered an era of equal opportunity and post-racial media representation and as media producers aim to appeal to the shifting demographics and interests of the younger generation. Case studies that ultimately contradict but occasionally confirm these claims will be explored in the book’s chapters, which focus on such topics as the history of “diversity” development strategies on the part of the major television networks, the experiences of writers and producers of color in the media industries, narrative strategies employed by creative producers of ensemble cast television shows and of comedic series which treat race in a satirical manner, and contemporary children’s and tween programming that emphasizes ethnic ambiguity.

Mary Beltrán is an associate professor of Communication Arts and Chicana/o and Latino/a Studies and an affiliate of Gender and Women’s Studies. Her work is focused on the production and narration of race, ethnicity, gender, and class in U.S. film, television, and celebrity culture, and the ways in which media texts, producers, and consumers articulate social hierarchies and group and national identities. She is the author of Latina/o Stars in U.S. Eyes: The Making and Meanings of Film and TV Stardom (University of Illinois Press, 2009), which explores the construction and promotion of Latina and Latino film and television stars in relation to the evolving status of Latinos in the U.S. since the 1920s. She also is the co-editor, with Camilla Fojas, of Mixed Race Hollywood (NYU Press, 2008), an anthology of scholarship on mixed-race representation in film and television. Prior to her academic career, Dr. Beltrán was a social worker, working primarily with youth and families of color.