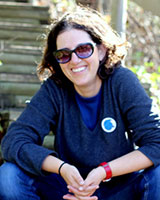 The Persistence of Realism in the Indian Novel in English

My project contributes to the ongoing critical reassessment of literary realism by piecing together an alternative narrative of South Asian literary history, one not modelled on a trajectory of belated modernity, but on a longer and more complex commitment to realistic representation. Serving various functions – from the need to construct shared cultural horizons to the demands of an increasingly global marketplace – realism, I argue, has persisted as a testament to the power of its conventions. While highlighting authors, novels, and novelistic elements previously neglected, and reconsidering the impact of those texts which have already gained prominence in existing accounts of the Indian novel, I show that this literary tradition also offers a pertinent critique of the realist form itself.

Ayelet Ben-Yishai is an IRH Honorary Fellow for 2013-2014. She teaches Victorian and Postcolonial Literature at the English Department of the University of Haifa, Israel. With degrees in both Law (LL.B. Hebrew University 1996) and Literature (PhD, Comparative Literature, University of California, Berkeley 2005) she has published in both fields and on their intersections. Her book, Common Precedents: The Presentness of the Past in Victorian Fiction and Law was published by the Oxford University Press in 2013. She is the recipient of a three-year Israel Science Foundation grant for her research on realism in the Indian Novel in English.