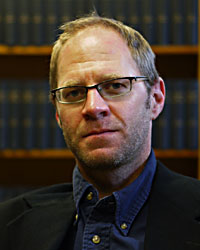 This interdisciplinary study brings together two major documents of a forgotten period and a backwater region—the Hereford Cathedral Mappamundi [“map of the world”] (c.1305), and British Library Manuscript Harley 2253 (c.1340), a trilingual literary anthology—and reads them alongside a contemporary life that has been reassembled from archival traces. We Have to Invent Him takes as its historical vantage point a mobile and well-connected but now obscure Hereford clerk who knew both map and manuscript well; he appears to have had a custodial relationship to each. The book I am constructing is a biography, but an unconventional one. My chapters stage conversations between a multifarious image, a multi-genre manuscript, and a reconstructed medieval “man,” using the first two items to breathe life into the third. Interpretive lines run both ways, however, for I will also use my subject’s biographical particulars and institutional milieus to animate my critical readings of the map and the anthology.

Daniel Birkholz is Associate Professor of English at the University of Texas at Austin, where he received the President’s Associates Award for Teaching Excellence in 2008. In 2002 he received Pomona College (Claremont, CA)’s Wig Distinguished Professorship Award. He received his Ph.D. from the University of Minnesota, his M.A. from the University of Toronto, and his B.A. from Carleton College (Northfield, MN). His first book, The King’s Two Maps: Cartography and Culture in Thirteenth-Century England (Routledge, 2004), was awarded the Nebenzahl Prize from the Newberrry Library (Chicago)’s Hermon Dunlap Smith Center for the History of Cartography. His essays on cartography and medieval literary history have appeared in New Medieval Literatures, The Journal of Medieval and Early Modern Studies, Imago Mundi, Studies in the Age of Chaucer, and The Post Historical Middle Ages (Palgrave Macmillan).