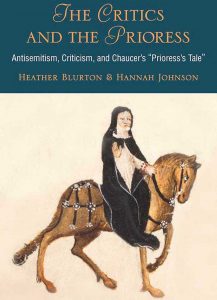 Inventing William of Norwich: Antisemitism and Literary Culture, 1150–1200 offers a revisionist reading of a twelfth-century saint’s life, Thomas of Monmouth’s The Life and Miracles of William of Norwich, which scholars have often seen as a seminal text in the development of antisemitism since it is the earliest accusation of a young boy purportedly ritually murdered by Jews. This book demonstrates how innovations in literary genres and forms in the twelfth century are deeply imbricated in the articulation of antisemitism, and how medieval antisemitism is as much a product of literary history as of economic or political history.

Heather Blurton is Associate Professor of English and Comparative Literature at the University of California, Santa Barbara. Her research interests include literary cultures of the long twelfth-century, medieval alterities, and the history of the discipline of medieval studies. Her most recent book, co-authored with Hannah Johnson, is The Critics and the Prioress: Antisemitism, Criticism, and Chaucer’s “The Prioress’s Tale” (University of Michigan Press, 2017).