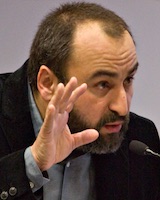 In Praise of Failure

At the IRH Bradatan is completing a new book, In Praise of Failure (contracted with Harvard University Press), which makes the argument that, because of our culture’s obsession with success, we miss something important about what it means to be human, and deny ourselves access to a deeper layer of our humanity. A sense of what we are in the grand scheme of things, an openness towards the unknown and the mysterious, humility and reverence towards that which transcends us – these are only some of the rewards that a proper grasp of failure could bring about.

Costica Bradatan is a Professor of Humanities at Texas Tech University. He has also held faculty appointments at Cornell University, University of Notre Dame, and University of Wisconsin-Madison, as well as at several universities in Europe and Asia. He is the author or editor of ten books, most recently Dying for Ideas: The Dangerous Lives of the Philosophers (Bloomsbury, 2015), and has written for The New York Times, Washington Post, The New Statesman, Aeon, Dissent, and Times Literary Supplement, among other places.