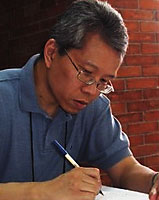 Rethinking the Ethics of War and Justice

At IRH, Chan is writing a book to challenge and replace traditional moral thinking about the ethics of war that takes the form of the just war theory. He argues that the rules governing how nations and armies fight wars are too permissive and fail to take account of the evil of killing innocent people and the moral and psychological damage to soldiers. In applying virtue ethics to war, Chan examines what the response of ethical human beings and communities should be towards their enemies, and shows that war is often inappropriate even if the conditions for just war are satisfied.

Chan is Associate Professor of Philosophy at the University of Wisconsin – Stevens Point, with research interests in moral psychology, virtue ethics, the ethics of war, medical ethics, and Greek philosophy. He edited an anthology on Moral Psychology Today: Essays on Values, Rational Choice, and the Will (Springer Books, 2008). Recent articles of significance include “Reasoning without Comparing,” American Philosophical Quarterly (2009); “Wrongful Life, Wrongful Disability, and the Argument Against Cloning” in Ethical Issues in the Life Sciences, ed. Frederick Adams (Bowling Green: Philosophy Documentation Center, 2007); “How War Affects People: Lessons from Euripides,” Philosophy in the Contemporary World (2006); and “Are There Extrinsic Desires?” Nous (2004). Chan studied philosophy at the University of Melbourne in Australia (B.A. Honors), the National University of Singapore (M.A.) and Stanford University (Ph.D.). He has been a Fellow at the Institute for Research in the Humanities in 2004-5, and a two-time Fellow at the Salzburg Global Seminar. He has also been a Visiting Scholar at the St. Francis International Center for Healthcare Ethics in Hawaii, and at the United Nations Association of Singapore.