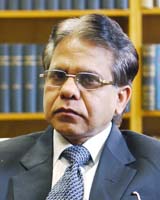 Hypertext is an electronic mediated text, which can be considered a ‘thought machine,’ while Techno-criticism is a new literary theory which aims to study, explain and explicate the hypertext. The objective of my project is to study different types of hypertext surveying hyper-literature. Although theories illuminate the experience of Hypertext, practical criticism faces major difficulties when Hypertext literature cannot be mastered as the reader can enter or leave in multiple places. The open-ended and multiple paths pose problems for the critics and readers. Secondly, my study will explore comprehensive ‘netspeak aesthetics’ for the hypertext and thirdly, it will identify the problems of syllabus-making in English and finally, to design a cyberspace course for the students of M.A. English Literature/Cultural Studies keeping in view the demands of the age.

N.D.R. Chandra is a Professor of Literary Theory at Nagaland Central University, Kohima Campus in India. He was Visiting Professor in the Department of English at Dr. H.S.Gour University, Sagar (M.P.) in 2006. He has experience as Head, Department of English and Dean, School of Humanities and Campus Incharge, NU Kohima Campus (2010-) for 5 years. He will be leaving for Brown University as a Visiting Scholar after completion of his term at IRH-UW-Madison. He was awarded Post-doctoral Grants by Indo-American Centre for International Studies in 1998, an Associateship of Inter-University Centre at the Indian Institute of Advanced Study, Shimla in 2001 for 3 years and Library Fellowship of the Centre for Contemporary Theory, Baroda (Funded by Ford Foundation, USA) for a month in 2007. He has authored Literary Theory and the New Critics (2000); Ecology, Myth and Mystery: Poetry from the Northeast (2007 with N.Das), Literary Terms in Poetry (2001); Literary Terms in Drama, Theatre and Cinema (2002); Literary Terms in Fiction and Prose (2004) (Trio with A.J. Sebastian). His editorial ventures include Modern Literary Criticism: Theory and Practice, Vol. I and II (2003), Contemporary Literary Criticism: Theory and Practice Vol. I and II (2005); Chhattisgarh Towards a Path of Development (in Hindi, 2003 with B.K. Patel); Modern Indian Writing In English: Critical Perceptions; Contemporary Indian Writing in English: Critical Perceptions (2005) Multicultural Literature in India: Critical Perceptions, Vol. I and II (2009-10), Postcolonial Indian English Fiction: Critical Understanding (2010). He edits a multidisciplinary bi-annual periodical entitled Journal of Literature, Culture and Media Studies. Chandra also holds a Fulbright-Nehru Senior Research Fellowship.