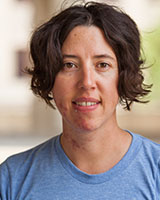 AIDS Knows No Borders: AIDS Activism and the Rhetoric of Immigration

AIDS Knows No Borders shows how activists constructed diverse coalitions to confront and alter U.S. health and immigration policy and politics as well as to engage and strategize with afflicted immigrant and migrant communities from the start of AIDS in 1981 until the lifting of the ban on HIV positive immigration to the U.S. in 2010. This monograph will offer a perspective on AIDS activism in the U.S. that does not center the experiences of white, gay, citizen men, and it will intervene in the racialized ways narratives of AIDS activism are recounted in historical, media and rhetorical research, which has focused only on either U.S. citizen communities of color or non- U.S. contexts such as Africa, Haiti or Latin America. This book will illuminate how activists interceded and participated in the racist, nationalist, and xenophobic discourses that impacted those immigrants living with HIV/AIDS in the U.S.

Karma R. Chávez is an Associate Professor in the Department of Communication Arts and affiliate in the Program in Chican@ and Latin@ Studies and the Department of Gender and Women’s Studies at UW-Madison. She is co-editor of Standing in the Intersection: Feminist Voices, Feminist Practices (with Cindy L. Griffin, SUNY Press, 2012), and author of Queer Migration Politics: Activist Rhetoric and Coalitional Possibilities (University of Illinois Press, 2013). Karma is also a member of the radical queer collective Against Equality, an organizer for LGBT Books to Prisoners, and a host of the radio program, “A Public Affair” on Madison’s community radio station, 89.9 FM WORT. She is at work on a project entitled AIDS Knows No Borders: AIDS Activism and the Rhetoric of Immigration.