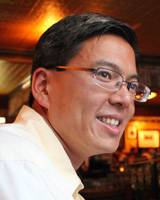 “Reconciliation Kitsch”: Multicultural Tropes and Overcoming the Past in Germany and Poland

Dr. Chu’s research project examines multiethnic politics in the Polish city of Łódź in the twentieth century and the post-1989 attempts to create international understanding between Poland and Germany. The stereotype of a cosmopolitan yet cunning businessman (“lodzermensch”) that began in Łódź at the end of the nineteenth century drew upon anti-Semitic tropes and had deadly consequences during the Second World War. By the 1990s, however, Germans and Poles promoted the city as the “Promised Land” and as a symbol of European reconciliation and multiculturalism. Both nations, it would appear, have successfully mastered their complex past. Yet underlying the often gushing pronouncements of friendship − what Klaus Bachmann calls “reconciliation kitsch” − are unresolved tensions that date back to the world wars, the Holocaust, and the division of Europe during the Cold War. The project analyzes differences in local and national understandings of European peace building and thus explores the possibilities and limits of German-Polish-Jewish interaction in the past century.

Winson Chu (PhD, History, University of California, Berkeley, 2006) holds an IRH Honorary Fellowship. He is assistant professor of Modern Central European History at the University of Wisconsin–Milwaukee. His doctoral dissertation won the UC Berkeley History Department’s James H. Kettner Graduate Prize as well as the Fritz Stern Dissertation Prize, which the Friends of the German Historical Institute (Washington, DC) awards to the best North American dissertations in German history. He has received fellowships from the German Academic Exchange Service, the United States Department of Education, the German Historical Institute in Warsaw, the American Council on Germany, and the American Council of Learned Societies. Dr. Chu recently held a fellowship at the Center for Advanced Holocaust Studies at the United States Holocaust Memorial Museum. His book, The German Minority in Interwar Poland, was published by Cambridge University Press in 2012.