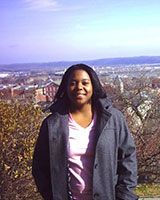 “Attended with Many Disadvantages and Evils:” Enslaved and Free Blacks in Rhode Island, 1652–1842

My project is a history of slavery, emancipation, and circumscribed black freedom in the North. Rhode Island played a unique role in supporting the institution of slavery in North America, because of its involvement with the buying and selling of people and goods that sustained plantations throughout the Americas. I argue that the experience of slavery, the process of emancipation as well as the legal and social restrictions placed on free blacks were fundamentally shaped by local economic activity. Moreover, an examination of the business of slavery illuminates how slavery and the racist legacies left by the institution became such an integral part of the American experience in the North.

Christy Clark-Pujara holds a REI Fellowship at the institute in the Spring of 2014. She received her PhD in History from the University of Iowa and is an Assistant Professor in the Afro-American Studies Department. She will spend the semester revising her manuscript. Her primary teaching and research interests include African American History to 1865 and U.S. Slavery and Emancipation; she is particularly interested in the interplay between economics and the creation of race-based slavery. Born and raised in Nebraska, where being a Nebraska Corn Husker fan is mandatory, she struggles with who to root for on football Saturdays.