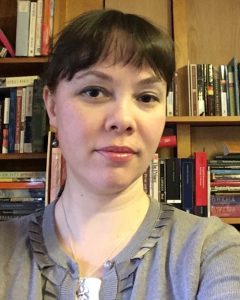 Watermen, Petermen, and Mermaids: Creatures of Conversion on the Early Modern Thames

Watermen, Petermen, and Mermaids: Creatures of Conversion on the Early Modern Thames is a book-length project that employs the discourses of conversion as a lens to examine three overlooked figures – “mermaids” (prostitutes), “petermen” (illegal fishermen) and watermen (ferrymen of the river) that haunted the outskirts of early modern London. Drawing upon the works of Taylor and Greene, the city plays of Beaumont, Dekker, Jonson, and Middleton, and London civic documents, I argue that these roguish creatures’ consistent association with unlawful activity reveals something about their ability to dissolve physical and moral boundaries. They enact their transgressions in a state of incomplete conversion – half-human, half-water – reconfiguring our understanding of London’s legal, political, and social limits. My project explores how these creatures’ riverine traversals unmade boundaries and exposed Londoners’ fears that they themselves were riverine creatures.

Sarah Crover received her PhD in English at the University of British Columbia (UBC) in 2016. Her dissertation was entitled “Theatrical Water Shows and the Cultural History of the Early Modern Thames.” Her research focuses upon London civic pageantry, the Thames, conversions of the body, and ecocriticism. Her work has appeared in Performing Environments and Early Modern Culture and is forthcoming in Studies in the Age of Chaucer,  Premodern Ecologies (University of Toronto Press), and Civic Performance (Taylor and Francis). Her research has been supported by the Social Sciences and Humanities Research Council (Canada), the Society for Theatre Research (UK), and the Early Modern Conversions project (McGill University). Before coming to Madison, she taught English literature and composition at UBC.