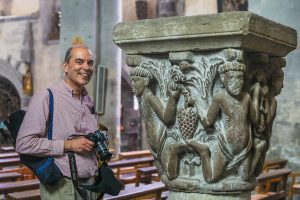 Visual images, ranging from Confederate statues to cellphone videos of George Floyd’s murder, constitute powerful technologies of racism, whose genealogy can be traced to pre-modernity. My book project explores the intersection of global cultural encounter with racial alterity in the visual culture of medieval Venice during the thirteenth and fourteenth centuries.

Past scholarship attributed Venice’s distinctive “Orientalizing” appearance to the city’s historic political ties to the Byzantine Empire and its expansive trade with the Middle East. I complicate this picture by exploring Venice’s opposing constructions of European, Christian whiteness and racial/religious othering. On one hand, I explore how Venice recreates the hybrid visual culture of Christian sites then under Islamic rule to authenticate its claims on Saint Mark and his Egyptian past. On the other hand, I show how the city participates in pan-European, essentializing discourses on Jews, “Saracens” (Muslims) and “Ethiopians” (black Africans) as non-Christian others and deploys the international Gothic style to construct its own place within white Christendom. Further complicating racial/religious dichotomies, I consider two additional factors: Venice’s leading role in the slave trade, which brought to the city increasing numbers of converted Slavs, Russians, black Africans, and Circassians as household servants and assistants to merchants; and its crusading agenda, which promoted both conversion and new alliances with Mongols and Ethiopians alike.

My primary evidence comes from visual narratives in the basilica of San Marco that tie Venice to the Holy Land and Egypt, relics and artefacts from the Middle East collected in the treasury, sculptures of racial subjugation on the exterior of San Marco and the Doge’s Palace, and narrative images and maps in Marin Sanuto the Elder’s crusading treatise Book of Secrets of the Faithful of the Holy Cross. Collectively these examples convey the complexity of medieval race-making in Venice and the medieval Mediterranean.

Thomas Dale (B.A. University of Toronto, M.A. & Ph.D., Johns Hopkins University) is President of the Medieval Academy of America, and Professor of Art History at the University of Wisconsin-Madison. His research and teaching explore the visual culture of medieval Europe and the Mediterranean. Particular areas of interest include the cult of relics and the saints, the senses and religious experience, race and cultural encounter. He has published three books: Relics, Prayer and Politics in Medieval Venetia: Romanesque Mural Painting in the Crypt of Aquileia Cathedral (Princeton University Press, 1997); as editor/contributor with John Mitchell, Shaping Sacred Space and Institutional Identity in Romanesque Mural Painting. Essays in Honour of Otto Demus (Pindar, 2004); and Pygmalion’s Power: Romanesque Sculpture, The Senses, and Religious Experience (Penn State University Press, 2019); as well as over 30 articles and book chapters. His research has been supported by the Center for Advanced Study in the Visual Arts (CASVA), Dumbarton Oaks, the Gladys Krieble Delmas Foundation, the Institute for Advanced Study in Princeton, the Metropolitan Museum of Art, and the Samuel H. Kress Foundation. He has held visiting professorships at the Ecole des Hautes Etudies en Sciences Sociales, Paris, and the University of Colorado-Boulder.