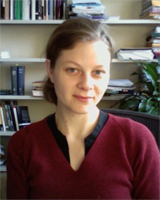 Myth in the Landscape: Ancient Heroes and Hellenic Culture in Imperial Asia Minor

This book uses notions of landscape as cultural process to examine the engagement of Imperial Greek literature with the material and visual worlds of Hellenism. Second Sophistic literature is famously classicizing and retrospective, but these writers also take a marked interest in how the Greek past emerges as a living presence in the physical landscape. In Asia Minor, the myths of the Trojan War especially offered more than just a vast archive of literary reference points. These stories – deeply resonant and endlessly flexible – were inscribed in the natural and monumental landscapes of the region. This project brings literary and visual evidence together to investigate the reanimation of heroic myth in Greek-speaking Asia Minor during the early centuries CE.

Janet Downie has been assistant professor of Classics at Princeton University since 2008. She received her PhD in Classics from the University of Chicago and her BA from the University of Victoria, Canada. Her research focuses on Greek literature of the Roman Imperial era and she is interested broadly in the history of rhetoric and oratory, authorship and issues of literary self-presentation, and ancient medical writers, including Galen. Her first book, At the Limits of Art: A Literary Study of Aelius Aristides’ Hieroi Logoi will be published by Oxford University Press.