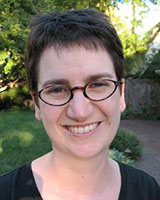 Command Performance: Tyranny and Theater in the Ancient World

Command Performance examines depictions of tyrants in Greek and Roman tragedy alongside depictions of historical Greek and Roman tyrants to demonstrate that they share a common representational strategy: they represent absolute power as a force that theatricalizes existence. Scholarship on tragedy and on absolute rulers tends to posit a relationship of unidirectional influence (from tragedy to real life or vice versa). This project combines literary, historical, and historiographical analysis to find a “feedback loop” in the relationship between theater and absolute rulers, as historians began to depict real rulers in “tragic” style, real tyrants began to style themselves after tragic kings, and tragic kings increasingly resembled historical rulers.

Anne Duncan holds a Solmsen Fellowship at the Institute for Research in the Humanities at the University of Wisconsin-Madison for 2013-14. She is an Associate Professor in the Department of Classics and Religious Studies at the University of Nebraska-Lincoln. Her publications include Performance and Identity in the Ancient World (Cambridge University Press, 2006) and articles on Greek and Roman performance issues. She is currently at work on two projects: a monograph about the intersections between theatricality and absolute rule in the ancient world (Command Performance: Tyranny and Theater in Classical Antiquity), and a textbook on Roman spectacle (under contract to Cambridge University Press).