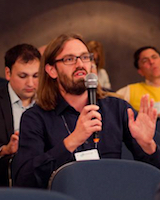 Plato’s Phaedo: The Initiation of a Philosopher

In my book project I provide a new, comprehensive reading of Plato’s Phaedo, a dialogue set on the last day of Socrates’ life. I argue that Plato appropriates and transforms Pythagorean and Orphic views in order to present a radical new account of the soul, the good life, and the nature of reality. According to this new account, the life of knowledge is the best life possible, but we are unable to fully realize this life while embodied. This ethical view, I argue, is grounded in a new account of the nature of the soul, which is in turn grounded in a new account of Plato’s forms. I show how the different elements of the dialogue fit together to form a cohesive philosophical vision.

David Ebrey (Ph.D., UCLA) works on ancient Greek philosophy, primarily on Plato and Aristotle. So far his research on Plato has focused on Socratic inquiry, the value of knowledge, moral education, and Platonic forms. His research on Aristotle has focused on matter in Aristotle’s natural philosophy and syllogisms in his logic. He has published in journals such as Journal of the History of Philosophy, Archiv für Geschichte der Philosophie, and British Journal of the History of Philosophy, and he has edited a volume, Theory and Practice in Aristotle’s Natural Science (Cambridge, 2015). He has received a Mellon Postdoc (2007-2009), Alice Kaplan Humanities Institute Fellowship (2011-2012), and a Spencer Foundation Grant (2012-2013). He was a visiting fellow at Clare Hall, Cambridge in 2013. He is currently working on a book on Plato’s Phaedo.