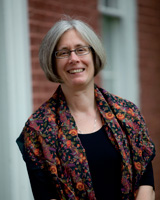 A Road of the Affections: Rhetoric, Catechesis, and the Cultivation of the Christian Self, A.D. 1-1150

This book-length project rewrites a paradigm long central to the discipline of medieval history and the study of medieval devotional literature: affective piety. It demonstrates that the genealogy of affective piety goes back to the arts of disciplining the passions that originated in the philosophical schools of antiquity, for philosophers who taught disciplines of the soul were also rhetoricians who sought to move and persuade. Their methods were adapted by early Christian teachers and rhetorical appeals to the emotions became a basic preaching, literary, and prayer practice of the church. This project, therefore, recovers the history of how preaching, texts, and practices were used to shape the emotions and craft Christian selves at different times and places.

Mary Agnes Edsall, Solmsen Fellow, has recently held positions at University of Massachusetts Boston (visiting) and at Bowdoin College. Her interdisciplinary scholarship focuses on the literatures and practices of Christian catechesis and devotion of the European Middle Ages, with attention to memory (personal and cultural), mnemonics, rhetorical theory, and the role of images and the emotions. She has recently published on early copies of Anselm of Canterbury’s Prayers and Meditations as exemplars of practice that drew their power from the way that they reproduced the charismatic presence of their author. Forthcoming articles address the patristic prehistory of medieval Arma Christi imagery and the connections between monastic anthologies for novice formation and household devotional anthologies of late medieval England. Her research interests also include Hugh of Fouilloy, an under-studied writer whose works were widely read in his time (mid-twelfth century) and beyond.