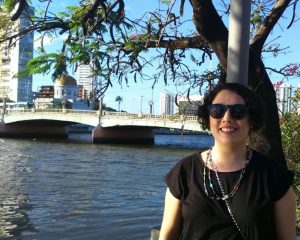 My book is an ethnography about how a range of musicians, cultural promoters, and bureaucrats, in Recife, Brazil, use music to imagine the social order and their place(s) within it. These processes are especially audible in Recife, a city whose reputation as a musically diverse place has long been perpetuated in popular media and by (inter)national scholarship. Over the past 15 years, state and municipal government institutions have intensified this reputation by sponsoring local music—from folk genres to cosmopolitan pop—to enhance Recife ‘s economy, promote democracy and multiculturalism, and bolster citizens’ pride. By comparing how various actors negotiate the discourses of state sponsorship as they perform, consume, and evaluate music, I reveal music is not only embedded in social life, but it is also a medium through which individuals, groups, and institutions, (re)produce, accommodate, and challenge the structures of power upon which the social order is based. Furthermore, the book reveals how people with varying relationships to state sponsorship and the Brazilian state, more broadly, are using music to redraw social boundaries and fashion new subjectivities. Consequently, these actors are situating themselves within multiple, and often, intersecting musically-mediated scales of belonging, including the local, regional, national, and global.

Falina Enriquez is an assistant professor of Anthropology at UW-Madison. As a cultural and linguistic anthropologist, her research examines artistic and communicative practices as constitutive elements of social life. She received her PhD in Anthropology at the University of Chicago in 2014 and has received grants from organizations such as the National Science Foundation and the Fulbright Program. As a faculty member at UW-Madison since 2015, she has been expanding her research on music and state sponsorship in Recife, Brazil. While in residence at the Institute for Research in the Humanities, she will complete her book manuscript, tentatively entitled, “Musical Scales of Belonging in Recife, Brazil.”