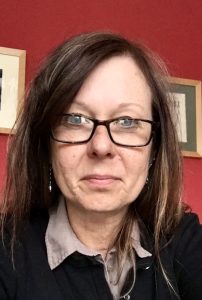 This study concerns an examination of the visual imagery, comprising photographs and film, of war crimes trials in Poland, specifically the 1944 Majdanek Trial held in Lublin, and the seven trials carried out during 1946-1948 before the Supreme National Tribunal. I have a collection of images that I gathered at the National Institute of Remembrance in Warsaw that I will analyse during the fellowship period. I argue that a study of visual imagery of these proceedings will inform a better understanding about the role certain actors played in the advancement of international criminal law and significance of war crimes trials in general. The Polish contribution to the development of legal principles of international criminal law is under studied. We can learn much more about the development of the Nuremberg principles.

Agata Fijalkowski’s research on the dispensation of justice in Central/Eastern Europe in the aftermath of WW2 is distinctly interdisciplinary. Agata’s work draws on archival research (in Albania, Germany, Poland, Romania, and the UK). Her current projects concern (1) a monograph on Law, Visual Culture and Show Trials for GlassHouse Books and (2) a legal/judicial biographical inventory of the members of the legal team at the war crime trials in Poland, locating these accounts in the international criminal law timeline. Agata is the recipient of the 2022 Socio-Legal Studies Association Small Research Grant Scheme Award that will support her research on the Polish defense lawyer Stanisław Hejmowski. Agata also is completing an MA in Screenwriting at Leeds Beckett University/Northern Film School.