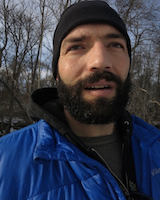 Twenty years after the end of Latin America’s bloodiest civil war, Guatemala City has become a hotbed of homicidal violence. Much of this bloodshed is blamed on maras, gangs bearing transnational signs and symbols, which operate in prisons and poor urban communities. My forthcoming book manuscript, based on ethnographic research inside prisons, courts, and urban red zones, explores the maras’ evolution and the world that makes them what they are today: victim-perpetrators of often spectacular violence and pivotal figures in a politics of death reigning over post-war society. However, while gangsters play starring roles in this account of extreme peacetime violence, they are not the problem. They are a hyper-visible expression of a problem no one can name, a deafening scream, a smokescreen obscuring innumerable and diffuse sources of everyday brutality. The phantasmagoric public image mareros make is both a product of and answer to a deepening sense of mortal doubt over the terms of daily survival. Through a mélange of ethnography, media analysis, short stories, and photographic essays, this book traces the tangled skein weaving the maras into collective nightmares swirling about extreme peacetime violence. In so doing, I expose the quicksilver metamorphoses violence undergoes as it moves through the social body, infiltrating and reordering lived and symbolic spaces, and escaping our best efforts to confront it, pin it down, and hold it at bay.

Anthony Fontes has worked as a free-lance journalist in Egypt and Guatemala, an actor in South America, an environmental justice advocate in India and Thailand, and an immigration legal advisor in California. He received his PhD in Geography from the University of California, Berkeley in May 2015. His written and photographic work in Central American cities explores the blurred boundaries between the underworld, the state, law-abiding society, legacies of civil war, the meaning of justice, and violence in its most extreme and banal forms. His research has been supported by grants from the OSF/SSRC Drugs, Security, and Democracy Program, the International Center for Global Conflict and Cooperation, the Woodrow Wilson Center, and the Harry Frank Guggenheim Foundation. His most recent article, “Extorted Life: Protection Rackets in Guatemala City,” will be published with Public Culture. He is at work on a project entitled “Of Maras and Mortal Doubt: Violence, Order, and Uncertainty in Guatemala City.”