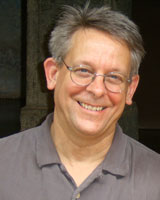 My project explores crafted things and the ethical and affective ties we form with them in our everyday lifeworlds and contemporary public spheres. A simple idea leads to me write about “companionable objects” and “companionable conscience:” Things, too, are social beings—though not human beings—and as we dwell together with them we become vulnerable to them, and they to us. In that mutuality of influence between people and things there is both care and violence. An ethical realm stretches between us. And so I want to pose a question: Will we see ethics differently, will we see conscience in a new light, if we look to things as a fulcrum in ethical relationships? Using materials from ethnographic fieldwork and art historical research in Indonesia and elsewhere, I suggest that we will.

Kenneth M. George is Professor of Anthropology at the University of Wisconsin-Madison, and affiliated with its Center for Southeast Asian Studies. His ethnographic research in Indonesia has focused on the cultural politics of minority ancestral religions (1982-1992), and more recently (1994-2008), on a long-term collaboration with painter A. D. Pirous, exploring the aesthetic, ethical, and political ambitions shaping Islamic art and art publics in that country. His books include: Showing Signs of Violence: The Cultural Politics of a Twentieth-Century Headhunting Ritual (awarded the 1998 Harry J. Benda Prize for best book on Southeast Asia by the Association for Asian Studies); and Picturing Islam: Art and Ethics in a Muslim Lifeworld. He also has co-edited (with Andrew C. Willford) a volume on Spirited Politics: Religion and Public Life in Contemporary Southeast Asia. Ken has been the recipient of major postdoctoral fieldwork fellowships from the Social Science Research Council, the Wenner-Gren Foundation for Anthropological Research, and the Aga Khan Trust for Culture. He presently holds a Kellet Mid-Career Award from UW-Madison. His fellowships for writing and study include awards from the National Endowment of the Humanities, the John Simon Guggenheim Foundation, and the Institute for Advanced Study. Ken was the editor of the multidisciplinary Journal of Asian Studies from 2005-2008, the first anthropologist and the first specialist on Southeast Asia to hold that position in the course of its 70-year history.