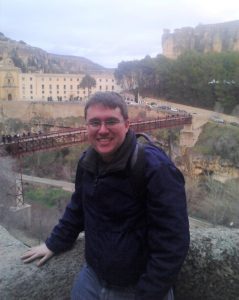 This dissertation considers the emergence of imperfectly formed genres in seventeenth-century Spain to theorize the picaresque. By focusing on a text’s ability to participate in multiple genres due to characteristics perceived by readers, authors, book sellers, and critics, I question idealistic tendencies that encumbered previous analyses of the picaresque and Cervantes. This framework allows me to identify formal and thematic interactions with the picaresque and other genres in Pedro de Urdemalas, Rinconete y Cortadillo, La ilustre fregona, El casamiento engañoso y Coloquio de los perros, and La tía fingida. These textual analyses reveal overlooked socioliterary criticisms of hegemonic institutions.

John Giblin is a sixth-year Ph.D. student in Spanish Literature at the University of Wisconsin-Madison. He is currently writing a dissertation related to Cervantes and the Picaresque with the working title Baroque Genres: Theorizing the Early Modern Spanish Picaresque through Cervantes. He is a Dana-Allen Dissertation Fellow for 2020-2021. He graduated from the University of Colorado Boulder in 2013 with a Masters in Spanish Literature and from the University of Central Florida in 2011 with dual degrees in Spanish and Political Science. He is a graduate from the Burnett Honors College; his Honors in a Major thesis was titled “Destiny, Honor, and the Seven Deadly Sins in La vida de Lázarillo de Tormes y de sus fortunas y adversidades”. As an undergraduate, he studied abroad in Alcalá de Henares, Spain. Following his Masters degree, he taught English abroad in Córdoba Spain and Madrid for two years. His areas of interest are XVI and XVII century prose fiction, satire, the picaresque, Cervantes, and literary theory.