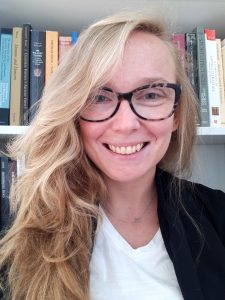 Dr. Golab specializes in ancient Greek choral poetry (ritual songs performed by a dancing and singing chorus) after 350 BCE. In her book project, “Songs and Stones: Postclassical Greek Chorality”, she explores epigraphic documents to unearth ancient traditions of poetry written in stone, and to analyze how the materiality of texts meshed with their fleeting performances. Those close readings expand to bigger questions of the roles that ritual songs could take on in local communities. Thus, “Songs and Stones” is divided into five thematic sections of Territories, Plays, Encounters, Politics, and Therapeutics, in which she respectively considers how ritual performance could create sacred landscapes, provide dramatized and theatricalized entertainment, mediate exchanges with non-Greek rituals, negotiate political relationships, and purportedly protect the health of a given community. The project challenges the status quo of the field of Classics arguing that instead of choral poetry’s demise the postclassical period witnessed both traditional and innovative forms of chorality. Dr. Golab’s other recent works include interdisciplinary approaches to ancient audiences and spectating, an essay on ancient popular culture, and an article on a curious use of Euripidean quotation in an ancient Egyptian ritual.

Dr. Golab is a cultural historian of ancient Greece broadly interested in literature, ritual, performative arts, epigraphic habit, and cultural exchanges in the Hellenistic and Roman Imperial periods. Having taught medical humanities courses, she is also expanding her expertise in the history of ancient medical and environmental thought, which will eventually lead to her second book project. Her Ph.D. is from Princeton University, and her MA from the University of Warsaw, Poland. She has previously held a Visiting Assistant Professor position at the University of Miami.