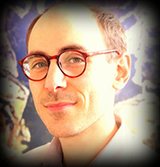 Passing as Open Secret: Race and Fictions of Identity in Nineteenth-Century Cuba

Passing is often understood as a divergence between the private and the public identities of a given subject, with the public identity perceived as fraudulent or as a simulacrum that aims at keeping the private one secret. The study of late nineteenth-century Cuba, however, reveals the need for an alternative analytical model, one that allows us to conceptualize those cases in which this divergence is disregarded or disavowed, and in which an ostensibly false identity is validated by social norms. The project focuses on a kind of passing that depended on open secrets, investigating the active forms of not-knowing — ranging from tactful silence and reserve to hypocrisy and disavowal — at the core of racial constructions at a pivotal moment in Cuban history. Victor Goldgel-Carballo’s corpus includes novels, theater, court cases, and advertisements.

Víctor Goldgel is an Assistant Professor in the Department of Spanish and Portuguese at UW-Madison. His research and teaching focus on 19th-century Latin American literature, media history, visual culture, and race studies. He is the author of Cuando lo nuevo conquistó América. Prensa, moda y literatura en el siglo XIX (Buenos Aires: Siglo XXI, 2013), the recipient of the Latin American Studies Association’s “Premio Iberoamericano,” an international prize awarded to the best book on Latin America in the social sciences and humanities published in Spanish or Portuguese. He is at work on a book entitled Passing as Open Secret: Race and Fictions of Identity in Nineteenth-Century Cuba.