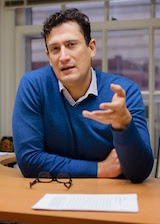 My current research project studies the development of novel ways of thinking about the human body and disease that appeared in Atlantic slave trading circuits during the seventeenth century. Specifically, it explores the emergence of ideas about fungible and universal bodies that were measurable in reproducible ways, and of diseases as ontological entities. I argue that these ideas, which today scholars identify as modern and “scientific,” first emerged in slave trading circuits. Their genesis was intimately linked to the unprecedented rise in the size and complexity of the commerce of human bodies in the early modern South Atlantic.

Pablo F. Gómez is an Assistant Professor in the Department of Medical History and Bioethics and the Department of the History of Science at the University of Wisconsin, Madison. He holds a PhD from Vanderbilt university, a MD from CES University and did his residency in Orthopaedic surgery at the Pontificia Universidad Javeriana. Pablo’s work examines the history of health and corporeality in the early modern Atlantic world. He has published numerous articles and book chapters. His forthcoming book, The Experiential Caribbean: Creating Knowledge and Healing in the Early Modern Atlantic (Chapel Hill: University of North Carolina Press, 2017), explores belief making and the creation of evidence around the human body and the natural world in the early modern Caribbean and black Atlantic. Pablo is currently working on a history of the universal quantifiable body and risk in the early modern world.