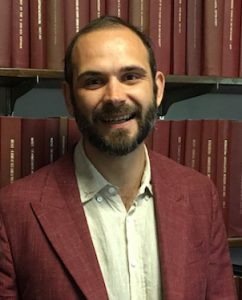 Structuring Vision: A History of Videotape

Carmine Grimaldi is interested in the creation, distribution, and social world of images. His book manuscript, Structuring Vision: A History of Videotape, investigates the hitherto untold history of early videotape, uncovering the ways the electronic moving image crept into, and profoundly reshaped, institutions and daily experience in postwar America. The new medium made the television screen a responsive participant in everyday life, able to replay events at the time and place they occurred. His research traces the migration of videotape as it accreted new meanings, uses and expectations, from its industrial origins in Palo Alto, to its dissemination around the country in psychiatry, education, and law, used as an instrument of knowledge and social control. He is also currently writing about conspiracy theories and media in 20th century America, and making a film about a ghost trial in Arizona.

Carmine Grimaldi is a historian and filmmaker. He earned his PhD in the Department of History at the University of Chicago in 2018, where he studied the history of media, technology, and culture in the US. During this time, he spent four years as an affiliate of Harvard’s Sensory Ethnography Lab, where he studied and taught film and filmmaking. His work has appeared in Representations, The Atlantic, and The Intercept, and his documentary films have screened widely at festivals such as True/False, Visions du Reel, Sheffield, RIDM, and Dokufest. In 2017, Filmmaker Magazine named him one of the 25 New Faces of Independent Film.