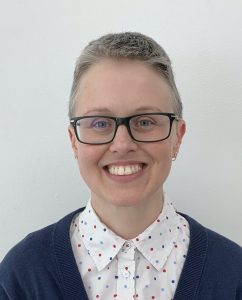 The central argument of this book is twofold: first, Victorian studies scholars must fundamentally reconceptualize our understanding of nineteenth-century gender to account for the possibility of movement between, across, and among genders; and, second, we must use this understanding to consider the possibilities of trans narratives within the diversity of gender identities represented in Victorian literature, periodicals, and authorial personae. In centering transgender identities that redefine and remake sexed and gendered bodies, my project argues that the discipline of Victorian studies must bring to the fore the ways in which the oppositional, binary discourses of gender necessarily reveal their own contradictions in the form of bodies and genders that refuse to fit into one of only two gender identities.

Lisa Hager is an Associate Professor of English and Gender, Women’s, and Sexuality Studies at the University of Wisconsin-Milwaukee at Waukesha, where they direct the LGBTQIA Resource Center. Their current book project looks at the intersections of trans studies and Victorian studies, and they have published articles on Victorian sexology, the New Woman, aestheticism and decadence, steampunk, digital humanities, and trans and queer studies. Their article on “female husbands” was recently awarded the Surridge Prize for Best Article Published in Victorian Review and the North American Victorian Studies Association Donald Gray Prize for the Best Essay Published in the Field of Victorian Studies. In January 2021, they assumed editorship, along with their colleague Dr. Anna Maria Jones, of the academic journal Prose Studies: History, Theory, Criticism.