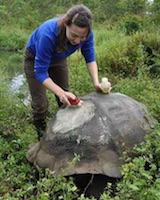 On the Backs of Tortoises: The Past and Future of Evolution in the Galápagos Islands

Since Charles Darwin rode on the backs of the Galápagos giant tortoises in 1835, the animals have morphed from a favorite food of pirates and whalers to conservation icons protected in a place often called a “natural laboratory of evolution.” My book manuscript tells the tortoises’ story to show that attempts to restore the islands to their pristine state as a living museum to Darwin actually jeopardize their prized nature. Instead, it reimagines how to conserve the islands as a laboratory of co-evolution where biological, economic, and social histories enmesh humans and non-humans alike in the web of life.

Elizabeth Hennessy is Assistant Professor of World Environmental History in the History Department and the Nelson Institute for Environmental Studies at UW-Madison. She is part of the Center for Culture, History, and Environment (CHE) and serves as the faculty advisor for CHE’s graduate-student-run digital magazine, Edge Effects. She is also affiliated with the Latin American, Caribbean, and Iberian Studies program (LACIS) and the Holtz Center for Science and Technology Studies. Trained as a geographer, she works at the intersection of political ecology, science and technologies studies, animal studies, and environmental history. Hennessy was formerly a fellow of the SSRC, ACLS, and Rachel Carson Center at LMU in Munich, Germany. Her first book will be published with Yale University Press in 2019.