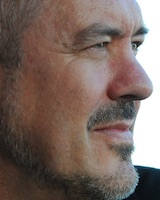 This book-length project examines modalities of relationships and communicability across ethnic, racial and especially religious boundaries in the 16th- and 17th-century Mediterranean, as conveyed by writers of the period in both fictional and nonfictional genres of texts. The first main focus is the Muslims in Spain and their expulsion to Islamic lands, a drama with major consequences for the entire Mediterranean world. The project also deals with captives’ stories from both sides of the Mediterranean and looks into the complex phenomenon of “renegades” (i.e., converts to Islam), who played such a key role not only as agents of conflict but also as intermediaries. Central to this project are thus contemporary writings by and about frontier figures, and questions as to how what was being experienced in the Mediterranean in terms of race, ethnicity, religion and gender could be conveyed through writing.

Steven Hutchinson received his doctorate in Comparative Literature from the University of Chicago in 1985, and is Professor of Spanish at the University of Wisconsin–Madison. His first book, Cervantine Journeys (University of Wisconsin Press, 1992), plots out a philosophy of the journey and its relationship to narrative within a comparative framework, with primary focus on Cervantes’ novels. His second book, Economía ética en Cervantes (Alcalá de Henares, Centro de Estudios Cervantinos, 2001), approaches ethical thought and behavior in literary works within the perspective of a system of values (e.g., what is a person worth?) and obligations (who owes what to whom, and how are these debts incurred and paid?), once again with primary reference to the writings of Cervantes. He has published over 40 articles on topics related to early modern literature, mainly Spanish. His grants include one from the Institute for Research in the Humanities and a year-long Fulbright research fellowship in Madrid.