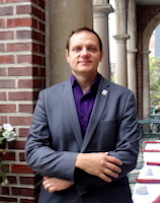 A Spiritual Revolution: The Impact of the Reformation and Enlightenment in Early Modern Orthodox Russia

This book project evaluates the influence of Reformation and Enlightenment ideas on Eastern Orthodox Church during the age of great reforms under the reigns of Peter I (1672-1725), Catherine II (1729-1796) and Alexander I (1777-1825). During this period of time, Russia’s energetic empresses and tsars engaged the country’s Western-educated and liberal church hierarchs to reform the empire’s faith, society, political ideology and every day rhythm of religious life for millions of the country’s Orthodox inhabitants.

Although most scholars view such ideas as being formative in the emergence of modernity in the Western Hemisphere (particularly in the Protestant and Catholic societies of Western and Central Europe), this manuscript argues, that they were crucial in the foundations of Russia’s modernizing empire. Reforms, inspired by the church, however, reached well beyond the boundaries of religion: in creating the new standards of social discipline and public hygiene, the new priorities in foreign relations, the celebration of reason, the rise of toleration, and the synergy of an enlightened faith with the pre-Darwinian science.

How does the church become “modern”? What does the term “reformation/reformatio” mean in the Catholic, Orthodox and Protestant contexts? Why did Russia’s rulers need an “enlightened” religion in order to build an “enlightened” empire? These questions – and more – will steer the writing of this manuscript further in the course of the project’s interdisciplinary journey through the fellowship at the IRH.

Andrey V. Ivanov (Ph.D., Yale University, 2012) is an Assistant Professor of History at the University of Wisconsin – Platteville. During 2017-2018, he will be an IRH UW System Fellow, spending the spring of 2018 full time in research at the Institute.