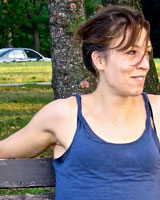 Practioners of so-called “biomimicry” have worked together to create objects like lotus-inspired paints, gecko-inspired adhesives, and lobster-inspired robots by reverse engineering “natural” or nonhuman lifeforms and redirecting them as solutions for human problems. Environmentalists, economists, government officials, and practitioners alike imbue this practice with the potential to engineer a more ecologically sustainable and politically stable future, calling it a “key driver of innovation” and a “game changer” in technological production. As biomimeticists disembodied and re-embody nonhuman lifeforms, however, they also destabilize historic understandings of life and society and challenges many of the concepts that undergird traditional political frameworks, such as territorial borders, notions of human exceptionalism, and conceptions of “life” itself. By connecting together the stated aims of biomimetic production with ethnographic observations of its practice, this study brings these disjunctures to light as well as the potentials of biomimetic design. Arguing that biomimicry creates new life worlds as it creates new technologies, I attend to biomimicry as an act of value production by exploring the practice’s socio-political dynamics and the everyday relationships as they blur the boundaries between humans, animals, and technology.

Elizabeth R. Johnson received her PhD from the University of Minnesota for doctoral work that focused on the political and social implications of “biomimicry,” an emerging field within which scientists reverse engineer biological traits for technological production. Johnson has published articles and reviews in the journal Ephemera: Theory & Politics in Organization and has a co-written essay on labor and time in higher education forthcoming in Acme.