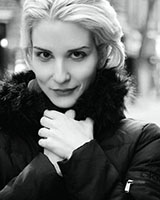 Black and Balkan: A Comparison of African-American, Caribbean, African and Balkan History, Theory and Art

This project is a comparative story of black and Balkan peoples, which uses new, archival material, such as Balkan “slave narratives,” an unknown documentary with Aimé Césaire (who wrote his famous hymn to blackness in ex-Yugoslavia), as well as numerous Yugoslav publications on black literature and rights. In it, I delineate the histories of enslavement of African and Balkan peoples. I start with etymology, as the word slave in every Western European language originates from the word Slav because of the massive slave trade of Slavic people, which lasted for centuries. I compare the work of Ivo Andrić, a male writer born in Bosnia, to the work of Toni Morrison, an African-American woman born in Ohio. While analyzing these histories and narratives, I search for postcolonial methods of reading that do not necessarily first pass through the “Western” filter, but that—instead—connect racially and ethnically “marked” authors, works, and cultures in a direct, unmediated way.

Anja Jovic-Humphrey was born in ex-Yugoslavia, Croatia, in what is in that region considered a “mixed marriage.” As a child of both Serbs and Croats, during the Yugoslav wars in the 1990s, she learned her first valuable lessons on the dangers of ethnicism, racism, othering, and discrimination, about which she writes to this day. While still a student of French and English Literature and Linguistics, Anja translated many novels from English and French into Croatian, by authors ranging from Nicole Krauss to Michel Houellebecq. The process of literary translation gave her insights into the nature of narrative, and into the differences and similarities between contemporary novels written in different languages and cultures. These insights prompted her to earn an M. A. in English and Comparative Literature at Columbia University (2008), and a Ph.D. in Comparative Literature at Brown (2015). Her recent work has been published in Johns Hopkins University’s journal MLN. She is at work on a project entitled “Black and Balkan: A Comparison of African-American, Caribbean, African and Balkan History, Theory and Art.”