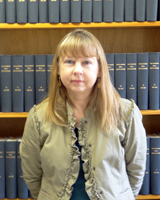 Angels of the Underground: A World War II Story of Love, Resistance, and Survival

This book project centers on the complex tale of two ordinary and flawed American women propelled by the extraordinary circumstances of World War II into acts of heroism. Margaret Utinsky, petite and redheaded, caustic and cautious; Claire Phillips, a willowy brunette, big-hearted, with a gift for gab. Confronted with the Japanese occupation of the Philippines, both women refused to surrender to civilian internment. Instead, they risked their lives to provide humanitarian support for American military prisoners and funneled supplies and information to guerrilla forces. Their story moves beyond the actions of two individual women; it is a larger story of how women survive in enemy-occupied territory during wartime.

Theresa Kaminski is a UW System Fellow. She holds a Ph.D. in History from the University of Illinois at Urbana-Champaign and is currently Professor of History at the University of Wisconsin-Stevens Point where she teaches American Women’s History. Her fascination with the inter-relation of gender, imperialism, and war resulted in the publication of Prisoners in Paradise: American Women in the Wartime South Pacific (University Press of Kansas, 2000) and Citizen of Empire: Ethel Thomas Herold, an American in the Philippines (University of Tennessee Press, 2011). After completing what she considers to be the final volume in her Philippines trilogy, Professor Kaminski will resume work on her biography of Dale Evans.