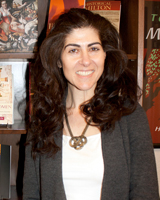 It is a long-standing truism that Old English literature rarely addresses sexual difference or erotic life, and is instead obsessed with chronicling blood feuds, heroic battle-quests, and inter-familial strife. Klein’s project examines the lexical and thematic intersections between warfare and sexual difference within literary, historical, and religious writings produced in England between approximately 700-1100 AD and provides a new conceptual framework for understanding long-occluded questions of gender and sexuality within Anglo-Saxon studies. By exploring a range of early medieval texts and traditions, from medical treatises, histories, and homilies, to heroic poems, riddles, and folk charms, The Militancy of Gender reveals the myriad forms of expression that affective relations and gender iterations may take, and contests the entrenched critical view that late medieval romance and courtly sexuality emerged as specific products of the twelfth-century literary renaissance. More broadly, the book offers a unique historical perspective on how cultural obsessions with warfare and vengeance-driven violence shape social understandings of difference.

Stacy S. Klein is an associate professor of English at Rutgers University, where she also serves as a member of the graduate faculty in the Department of Women’s and Gender Studies and a core faculty member in the Program of Medieval Studies. Her scholarly interests center on medieval literature and culture, with an emphasis on Old English language and literature, the history of gender and sexuality, feminist thought, comparative cultural studies, ideology, and aesthetics. Klein is the author of Ruling Women: Queenship and Gender in Anglo-Saxon Literature (University of Notre Dame Press, 2006), and has written numerous articles on Old English poetry, biblical translation, hagiography, and the natural world. She is also co-editor of two forthcoming interdisciplinary collections of essays: The Maritime World of the Anglo-Saxons, and The Anglo-Saxon Visual Imagination. Klein has been awarded fellowships from the ACLS, NEH, Radcliffe Institute, and AAUW, as well as a Burkhardt Fellowship for Recently Tenured Scholars. From 2007-2011, Klein served as Executive Director of the International Society of Anglo-Saxonists (ISAS), and she currently chairs the Modern Language Association’s Executive Division on Old English Language and Literature. In 2004, Klein joined forces with Anglo-Saxonist faculty at Columbia, NYU, and Princeton to found the Anglo-Saxon Studies Colloquium, an organization dedicated to advancing Anglo-Saxon Studies in and beyond the tri-state area. Klein holds a BA in English from Dartmouth College (1989), an MA in Critical Theory from the University of Sussex (1992), and a PhD in English from Ohio State University (1998). She has taught at Rutgers since 1998, and in 2011, served as Vice-Chair of the Department of English. In 2001, Klein was awarded the Sigma Phi Epsilon award for excellence in undergraduate teaching.