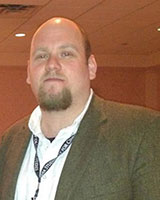 In the decades following World War I, motion pictures became a prominent component of the American collegiate experience on and off-campus. Universities served as screening venues, sites to study the medium of film, production venues, and distribution centers for educational motion pictures. My dissertation project examines the uses of motion pictures by universities as well as the conditions in which this relationship facilitated the transformation of the cinema from an ephemeral entertainment to a lasting and essential pedagogical tool. Nontheatrical films were mobilized to bring higher education to the public at large, particularly in the contexts of university extension and intercollegiate football, as educational and training films were appropriated to extend the universities’ reach into surrounding communities while negotiating the contradictions and benefits of big-time college athletics.

Alex Kupfer is an IRH Honorary Fellow for 2013-14. He is a PhD candidate and adjunct instructor in the Department of Cinema Studies at New York University, Tisch School of the Arts. He received an M.A. in Cinema and Media Studies from the University of California-Los Angeles. His research interests include sponsored and industrial film, U.S. sports history, film archiving and preservation, and the cultural history of listening practices. He most recently contributed an essay on the development of technology in sports broadcasting to the anthology American History through American Sports.