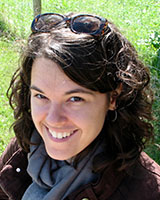 This project is an intellectual history of dietetics in the nineteenth century. I focus on a trans-Atlantic network of chemists, physiologists, physicians, and social reformers who created a new conceptual underpinning for dietetics and, in the course of doing so, formed a new consensus about the social value of scientific ideas. Collectively, their work changed dietetics from a discourse of individual self-management, where one ate to maintain one’s own moral and physical health, to a universal science that would link an individual’s dietary choices to the health of the society they inhabited. Through an excavation of the conceptual roots of dietetics, my project documents the development of universal standards for healthy eating and the shifting ethical valence of diet from the personal to the social.

Molly Laas is a PhD Candidate in the Program of the History of Science, Medicine, and Technology at UW-Madison. Her work explores the intellectual cultures of science and medicine in the nineteenth century, focusing on the trans-Atlantic circulation of ideas about chemistry, physiology, health, and the interplay between science and social thought. Her work has been supported by a University Fellowship and a Chancellor’s Fellowship from the University of Wisconsin, a research assistantship from UW-Madison Center for German and European Studies, and the History of Science Department’s Lindberg, Coleman, and Richardson fellowships. She received her B.A. in comparative literature from Smith College in 2004, and worked as a science journalist before receiving a Master’s degree in the history of science from UW-Madison in 2012. She is currently at work on her dissertation entitled “From Regimen to Regime: The Social Meaning of Nutrition, 1840-1910.”