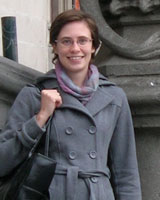 The resurrection of the dead, wrote a sixteenth-century German preacher, was the most debated article of the Creed. While Lutherans, for example, described the reassembly of the body, Anabaptists argued that one’s resurrection took place as one became a baptized member of the community. Through Lutheran, Anabaptist, Reformed, and Catholic songs and images of resurrection, my dissertation asks how devotional practices constructed such differences in communities in sixteenth-century Germany and the Netherlands. The project draws together a broad range of sources, including hymnals, sermons, martyrologies, and trial records. Through them, I examine practices of singing, seeing, and listening—actions which integrate the body into religious identity—and argue that divisions between Christians were deeper and more complex than narratives of political division and social control have anticipated. In their practices of piety, each group rendered differently the body’s rebirth and the community’s reconstitution, revealing divergent conceptions of personhood and communal identity.

Erin Lambert is a Ph.D. candidate in early modern European history at UW-Madison. Her research employs the methods of cultural history, musicology, and visual studies to explore the interplay of devotional practices and religious identities in sixteenth-century Germany and the Netherlands. Her dissertation research has been supported by a Council on Library and Information Resources Mellon Fellowship for Dissertation Research, the UW-Madison Department of History, and the Social Science Research Council’s Dissertation Proposal Development Fellowship. She holds undergraduate degrees in history and music performance from the Robert E. Cook Honors College at Indiana University of Pennsylvania and an MA in early modern history from UW-Madison.