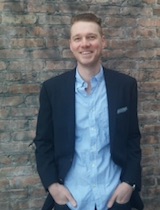 The Question of the Early Modern Public: Consensus and its Limits in the English Literary Renaissance

My dissertation investigates irresolvable disagreement in the literary culture of the English Renaissance (for me, ca. 1579-1625). Against other scholars, who have argued that poems and plays at this time fostered a post-Reformation public sphere in which people could communicate their opinions and debate matters of common concern, I instead see the literary production of this society as testing the limits of discursive interaction between disagreeing parties. Even as my work focuses most directly on attempts by a Puritan publisher, a Catholic playwright, and a female satirist to navigate a public hostile to all three of these groups, it also speaks more broadly to the role of literary culture in creating public spaces in which empathetic engagement is possible even when consensus is not.

Victor Lenthe is a Ph.D. Candidate in the Department of English at the University of Wisconsin – Madison. His research focuses on early modern literary culture and post-Reformation Europe’s experience of religious difference. His dissertation is entitled “The Question of the Early Modern Public: Consensus and its Limits in the English Literary Renaissance.” It examines early modern writers like Edmund Spenser, William Shakespeare, and Ben Jonson for historical perspectives on debates between modern political theorists about the nature of pluralism and the role of literature in public life.